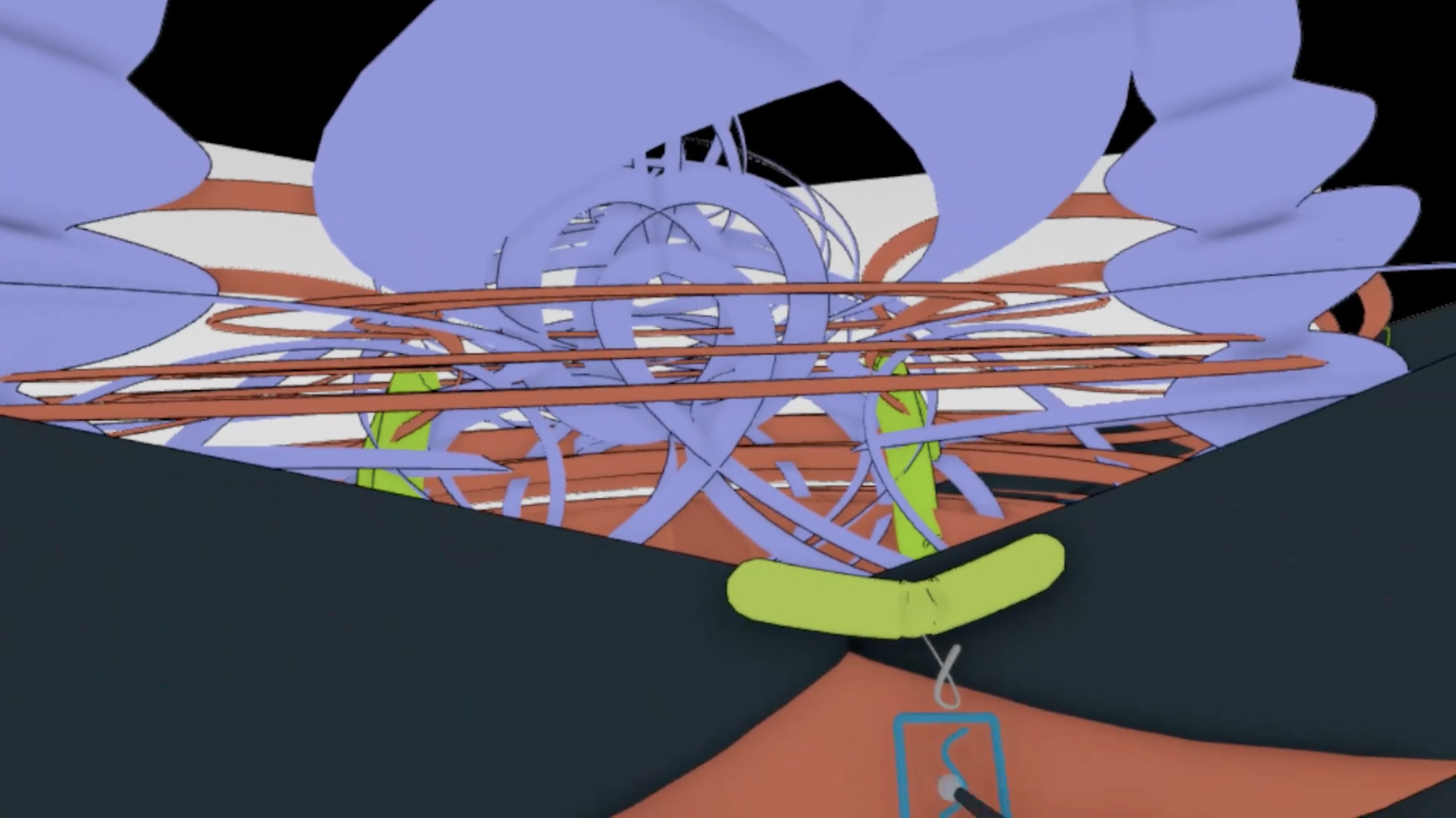 Activating Spaces is an experimental art project that takes on of the idea of multiple dimensions that space and bodies can inhabit. Firstly, it is important to note that this was done in collaboration with Emily deGrandpré an Architectural student here at CMU. We both had interest in experimentation with projectors and quickly seized upon the idea of creating and recording some experimentation in Gravity Sketch, a virtual reality design program and projecting them onto an inexpensive laundry bag.

While we both committed to this idea, we each did so with slightly different reasons. I will be speaking for myself here but there will be some overlap in our ideas because our discussions in this collaboration was generative and fruitful. You can read Emily’s paper here and find more documentation from the project.

I have been thinking about the reciprocal nature of bodies and spaces through the lens of virtual reality. Does VR alter the way bodies activate spaces and spaces activate bodies? I wonder how the nature of VR could be used to re-examine that relationship. My previous artworks engage bodies moving through virtual spaces, the marks and gestures they leave, and the performative nature of being in VR. Staying within that trajectory for this project I wanted to make gestural drawings in the virtual world that record the history of actions thus implying presence of a body. I also wanted to make gestural marks large enough that they become landscape or environment. Space, body, and action would be activated by each other and VR would be the tool to allow us to create, manipulate, and record the relationships of these elements.

The head mount display (HMD) was used as a video camera and so we used it to “fly through” the virtual marks by walking through the physical space with the HMD as well as set it on a tripod to capture our process of manipulation and creation. The projection being the final output of this project we thought about the view from inside the HMD to visualize what would end up projected onto the mesh. Neither of us had done this before so the process of making the VR artworks was experimental however looking through the HMD helped visualize our end, like a camera viewfinder.

Moving and animating in the physical space was an experimental endeavor. We had not worked together before and come from different disciplines, so we needed a way to collaborate that allowed for experience and experiment. We agreed that some parameters were needed, so we marked off a physical space to work within (approx. 6’ x 7’), set music to pace ourselves, created three ‘acts’ (Emily, Michael, Group), and gave ourselves about 8–10 minutes each act. Gravity Sketch was then animated by the gestures we made in virtual space. Emily used her dance background in movement and gestural arcs to create a dense and rich system that reminded me of the tubes, veins, and organs found inside our bodies. My recording came from the measurements of my body twisting, my extended reach and arm lengths. I also played with the history button in Gravity Sketch, erasing my previous marks then repeating the action and mark. Our last “act” which we did together was created by measuring the space and relations between us. We did this with a tool in Gravity Sketch that allowed us to create a line or plane between the two VR handheld controllers. Emily held one controller and I the other, so we could create a line in space between the top of our heads, so we made a few virtual sculptures using our bodies and movements in space. The final exercise of the last act was to manipulate the scale and orientation of the virtual sculptures. The approach was similar to the first part since we each had a controller and the scale and orientation would change based on the distance, and direction of the controllers. Moving about the physical space we performed an impromptu dance while manipulating sculptures in the virtual space.

This project in its final form was conceived as a holographic projection. We thought that it would be interesting to present it on a mesh laundry basket. Emily found a tutorial online about projecting on a laundry basket and suggested it as a cheap and easy way to get the effect of space between the projection planes. The basket was our “hello world”. The gestures, and movements could come alive in the virtual space and be translated back into the physical as light on the mesh of the laundry bag. Ultimately creating the illusion of a moving hologram. I was especially excited by the effect of intersections of planes on the mesh bag. The mesh laundry bag being rectangular in nature also has two subdividing mesh walls inside it or another way of putting it, there are three open spaces inside the laundry bag separated by mesh. The effect of this was that there were intersections of image would split and converge. It looked as though it was a holographic kaleidoscope.

Our movements in space and time within physical space went through many translations some of which is outlined below.

-The physical space where we made our gestures and manipulate our marks.

– Recorded and transmitted by infrared hardware.

– Translated into the virtual coordinates.

– Calculated, processed and stored in a digital medium.

– Encoded and saved as a digital video format.

– The video is then again mapped onto a shape of the laundry bag.

– Played and projected by LED onto a rectangular mesh laundry bag, distorted by the intersecting planes of the structure thereby giving the digital product physical space to cling to.

– Bodies navigate around the projection, and experience multiple angles and views.

The relationship of bodies and spaces through a virtual lens is mediated by technology. The mediation is obvious, but what is less apparent is the continual shift in relationship between bodies in space. The relationship in this project that revealed itself was the opening and closing, expanding and contracting of bodies and spaces. Bodies expanding in physical space through the performance, collapsing into points in space and further compressed into lines of code. That code is then opened processed and expanded into sequential images and translated into a flattened projection. The flat video of projection is expanded on the mesh laundry bag, and further activated by people viewing it from multiple angles. The digital/virtual seems to change the relationship of bodies in physical space from a stabilized sense of presence to a destabilized fluctuation of presences. Virtual reality opens multiple dimensions that the artifacts of our bodies, spaces and actions are expanded and contracted. In and between each translation give rise to creative activity of bodies and spaces.